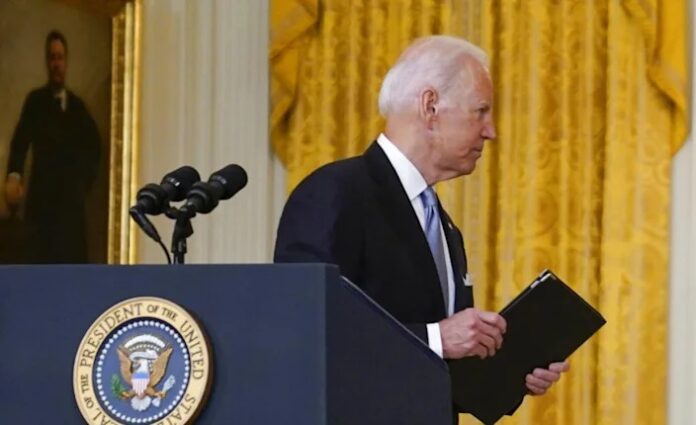 Afghan fallout: The U.S. exit from Afghanistan is upon us, and it is not so much a withdrawal as it is a rout. The Taliban are reportedly hunting down Afghans who cooperated with or otherwise helped Americans. The reprisals are brutal. There are also less common reports of them beating Americans. And of course, although ISIS and the Taliban are enemies on paper, it would not break the latter’s heart if the former were to carry out a successful attack on those Americans currently stranded in Afghanistan by President Joe Biden’s incompetence.

Only the worst sort of incompetence could have caused this outcome. After 20 years in the country, it should have been obvious that there were several possible ways to leave in orderly fashion.

The Taliban, seasonal fighters, could have been counted on to go home at some point as the weather grew cold. That would have given American forces some more breathing room to leave in an orderly fashion.

Alternatively, additional military personnel could have been brought into the country to take the fight to the Taliban for a time, while American civilians and Afghan allies made their exit at the rear.

It is a mystery why no one had a plan for any of this. But all appearances suggest that the Biden administration was simply caught with its pants down. They planned poorly and had no idea what they were doing.

There was no rush to leave Afghanistan immediately. President Biden had already ignored President Trump’s earlier withdrawal deadline in May, so there was no reason this absolutely had to happen right away.

The magnitude of this miscalculation, and the potentially lethal consequences, are creating a stain on Biden’s presidency that threatens to define it permanently. Biden’s approval rating is hitting new lows. Most importantly, the image of normalcy and competence that he had tried so hard to create in contrast to the Trump administration has been shredded.

Even worse is the manner in which Biden himself has been handling this in public. He has repeatedly given public speeches in which the argument he makes is utterly disingenuous, beneath the dignity of his office and the gravity that the situation demands.

Instead of addressing the real issue, Biden keeps acting as though his problem is really just that people are questioning the decision to leave Afghanistan. This is utterly false, and a straw man. Nothing could be less relevant than the decision to leave — it is entirely a question of the disastrous manner in which it is being done.

The US is fleeing Afghanistan in a panic. That Biden exited without any apparent plan is genuinely sad, and it is even worse that he is trying to dismiss questions about his competence through deflection, as if the only alternative were to stay in Afghanistan forever. Biden’s disingenuous arguments are a demonstration of mens rea. They show that he is culpable and doing everything possible to shed responsibility.

More than at any point up to now, the midterm election issues that threatened to confound and possibly drown the Democrats are starting to take shape in earnest. Biden’s Afghanistan disaster will be front and center, helping to highlight other areas of incompetence, as Republican candidates seek out and attack Democrats’ weakest points on the campaign trail.

At this point, Newsom is framing his pandemic lockdown strategy as the best thing for the state, framing Elder as an opponent of mask and vaccine mandates. It is a rather brazen tactic, given that Newsom is now being recalled in large part because he was caught violating all of his own social distancing and masking rules, partying it up with lobbyists.

Elder, meanwhile, is wisely attacking Newsom for the state’s rapidly worsening crime and homelessness problems, which come just as Democrats push to defund the police and liberal judicial decisions prevent the enforcement of ordinances against public camping that are ruining many beautiful California communities.

Newsom’s fate, however, is not tied to Elder’s . Even if 70% of California votes choose against Elder, it only takes 50% plus one to vote to recall Newsom on the first, separate ballot question.

New York: The resignation of Gov. Andrew Cuomo gives Democrats a much better chance of hanging on to the reins of power in New York. You could almost say that it comes as a setback for the likely Republican and Conservative Party nominee, Rep. Lee Zeldin.

One might assume that he will now have to defeat the significantly less objectionable Kathy Hochul, but the nomination is by no means guaranteed to her, especially if Attorney General Letitia James chooses to run against her in the Democratic primary. At least one poll shows a competitive race between the two. In case anyone was wondering (and no one was), the poll shows that New York City Mayor Bill de Blasio is not competitive in such a race.

Laxalt lost the governor’s race in the Democratic wave year of 2018. But this time, his chances are markedly better. He is the first true conservative to enter the race with statewide credentials. Nevada’s slide toward Democrats even after their party’s 2014 collapse, has been a troubling problem for the state’s Republicans. One of the challenges Democrats face, however, is to motivate their voters despite the exit of President Trump from the political stage. Trump immediately endorsed Laxalt when he announced, but his involvement will not overcome the historical reality that repeatedly reasserts itself in midterm elections. Biden is president and a great deal is going wrong.

Meanwhile, Trump has a great deal of upside in the state as well. This is one of the states where Republicans will be looking for ways to capitalize on Trump’s relative overperformance with non-white voters in 2020. A concerted anti-socialist campaign to win Asian and Hispanic voters would be especially wise.