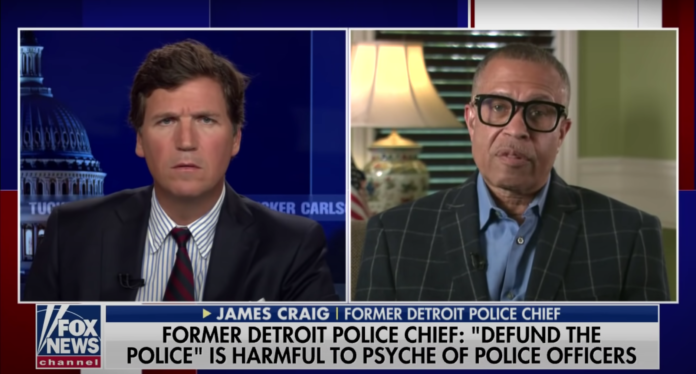 Former Detroit Police Chief James Craig, rumored to be seriously considering a Gubernatorial run in his home state of Michigan, is reportedly inching closer to a decision as he continues to be a frequent guest on Fox News.

Craig will appear on Tucker Carlson Tonight Wednesday, a program he’s been on at least dozen times in the past year after policing in America became a focal point as numerous high-profile incidents involving law enforcement and the black community captured the attention of every major media outlet in the country.

Tucker Carlson, who is wary of wading into specific campaigns (especially a statewide campaign), said he hopes Craig runs and beats Whitmer. That kind of endorsement from arguably the biggest name in conservative politics besides Donald Trump, is invaluable.

Craig’s record as chief of police, particularly in 2020, is the reason Carlson and so many others see Craig as a leader.

As violence erupted in major cities across America in the summer of 2020, the city of Detroit was kept relatively calm under the leadership of Chief James Craig and the Detroit Police Department. Many in the city and surrounding communities credit Chief Craig for keeping order and ensuring that outside agitators were kept from damaging downtown Detroit.

Contrast Detroit and Craig’s leadership with city governments and police officials across the nation who struggled to keep the peace. In Minneapolis, an entire police precinct was overrun by agitators. In Washington, D.C., violent protests set cars on fire and broke into private businesses and residences in the heart of our nation’s capital.

Craig resigned as chief this summer, following eight years on the job, and is being courted by the GOP and rank-and-file grassroots activists to take on Whitmer. He gave an impassioned speech July 6th from Jackson, Michigan, the birthplace of the national Republican Party, espousing his conservative values. The speech garnered rave reviews across the conservative movement, and also struck a chord with Michiganders who feel the current Governor’s lockdown orders may have gone too far.

Observers see a Craig candidacy as an opportunity to contrast the GOP’s message of public safety with that of the Democrat Party, whose leading voices are calling for defunding the police and opening America’s borders.

Recent polling has Chief Craig already leading Whitmer 45 percent to 38 percent, outpacing even John James, who loses to Whitmer in the poll, 50 percent to 45 percent.

Craig would enter the primary as a big name capable of competing with Whitmer on cash and earned media.

Craig’s track record of leadership, self-reliance, public safety and competency against Whitmer’s failed pandemic response, which shuttered thousands of small businesses and destroyed lives and livelihoods, will resonate with voters according to some observers.

He will have the opportunity to contrast his 44-year law enforcement record, which included stints as Chief of Police in Cincinnati, Ohio and Portland, Maine, with the record of Whitmer, which includes record unemployment and a shortage caused by Big Government Democrats.

Craig can run up the score in Michigan’s most heavily populated region where he enjoys high favorability and name ID.

Macomb County the birthplace of Reagan Democrats, and now Trump Republicans. It has a strong union presence but considers themselves patriotic, socially conservative, and they reject today’s wokeism from the left.

Oakland County is trending away from Republicans, but a candidate like Chief Craig should be able to bring home some suburban voters who have left the GOP on the issues of crime and public safety.

Wayne County includes the City of Detroit but also important cities such as Livonia. Craig can improve the numbers just enough to make all the difference.

If Craig can perform as well as John James and Donald Trump in Macomb County, while bringing Oakland County moderates back to the Republican Party because of the strength of the job he did in Detroit in keeping communities safe, he will likely upend Whitmer and the Democrat’s current hold on power in the Great Lakes State.