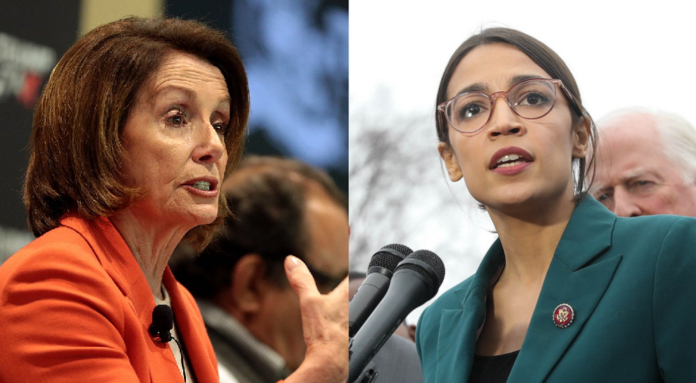 House Leadership: Who is in charge of House Democrats? You could be forgiven for thinking that it’s Alexandria Ocasio-Cortez, D-N.Y. Her ability to commandeer the limelight with fake photo-ops and outrageous comments has flustered a lot of conservatives. But the most frustrated onlooker at all this is House Speaker Nancy Pelosi, D-Calif., whose authority Ocasio-Cortez has been undermining at every step.

Things went beyond the point of good will this week when AOC finally insinuated that Pelosi was a racist and a sexist. Really — you read that right. This feminist icon, the first female speaker of the House, is now being mau-maued by these most problematic freshman Democrats. Pelosi privately demanded that they refrain from tweeting about intra-party disputes against their fellow House Democrats — you know, the ones defending more vulnerable seats. AOC decided that this imposition of party discipline was an affront to herself and three other freshman Democrats — Rashida Tlaib, Ilhan Omar, and Ayanna Pressley — because they are “women of color.”

After all the years of ending every political debate with the word “racist!”, there is no party that deserves this cannibalism more. But this will serve as a milestone as Republicans, led by Donald Trump, attempt to convince the nation that Democrats are simply too crazy to govern.

Unfortunately, over the weekend, Trump found a way to help his enemies reunite around this issue. But that’s not the point. The point is that the Democratic Party is so tense that their most prominent member just called their leader a racist. This is not a healthy party, but rather a party on the edge of exploding.

Biden’s downfall, or just Bernie’s? With the first debate over and the second coming up, the national polls for the Democratic nomination suggest that Joe Biden did badly, as we believed he did. Biden has taken a hit for now, but the polls aren’t everything. Bernie Sanders might prove to be the first victim.

The reason is that there are two lanes in the Democratic race. Biden occupies the pre-woke Democrat lane, with a few of the lesser Democrats (Pete Buttigieg, Tulsi Gabbard, and a few others barely worth mentioning) feebly challenging him for some elbow room. Meanwhile, all of the “woke” Democrats occupy the other lane. And it’s likely that none of them can overtake Biden until Sanders has been driven out of the race or at least into irrelevance.

There is a paucity of polling in Iowa, New Hampshire and California at this point. But the questions going forward are probably as follows: (1) How much longer can Sanders last, (2) who inherits his support and becomes the true left-wing alternative to Biden.

The latest national poll suggests that Warren currently has the best claim to the “woke” lane, leading both Sanders and Kamala Harris by six points while trailing Biden by seven. But it’s early yet.

California Dreamin’: Don’t forget that the Golden State plays a new and important role this year with a March primary. Complicating this year’s contest are the late entry of San Francisco leftist billionaire Tom Steyer — perhaps upset at the major candidates’ lack of attention to climate change — and the fact that California’s own Kamala Harris will be a favored son (so to speak). Harris was polling in fourth place when the last poll was taken in early June, with Warren and Sanders both nipping at Biden’s heels.

Nut-roots: Warren was the only Democrat worthy of note (there were three others) to address the Netroots Nation conference in Philadelphia. Warren was also big at Netroots last year, when she was described by Vox as “the left’s early favorite for 2020.”

Alabama: Sen. Richard Shelby, R, brought up with President Trump the possibility of former Attorney General Jeff Sessions running to reclaim his old Senate seat from Democrat Doug Jones. Trump was not thrilled with the idea and probably would not go along quietly.

Kentucky: In May of this year, there are 2,000 fewer registered Democratic voters in Kentucky this year than there were in 2014. In the same five-year period, the Kentucky GOP registered 232,000 net new voters.

That figure is just one of many that illustrate the problems faced by any Democrat seeking office in the Bluegrass State in 2019 and 2020. There is no question which way this state is trending, both in its voting patterns and in its registration. President Trump’s 2016 victory in Kentucky was the biggest since Richard Nixon’s 1972 landslide.

Kentucky’s registered Democrats still outnumber its registered Republicans, but the gap is narrowing, as the accompanying chart demonstrates. Increasingly, Kentucky votes Republican at all levels.

Already, Gov. Matt Bevin’s re-election race is well underway. Having narrowly survived an unexpectedly strong primary, the extremely unpopular Republican governor nonetheless has no worse than even odds in his race against Democratic Attorney General Andy Beshear. In fact, the only poll of the race so far shows Bevin enjoying a six-point lead. Despite a rebellion over his pension reforms and budget cuts, the state’s voters seem reluctant to let even a Democrat with a popular family name (the son of former Gov. Steve Beshear) take office.

That should illustrate just how difficult it is for any Democrat in Kentucky right now. There’s very little margin for error, and even a perfect campaign can probably lose. So for a Democrat who has just had the miserable, embarrassing rollout that Amy McGrath suffered last week, it’s going to be a very bad time.

Sen. Mitch McConnell, R, has only just begun to take full advantage of McGrath’s past comments comparing President Trump’s election to 9/11, and her description of herself as the most progressive person in Kentucky. And yes, expect to hear much more of those quotes.

But McGrath hurt herself anew with her double back-flip last week on whether, as a senator, she would have voted for Supreme Court Justice Brett Kavanaugh’s nomination.

A year ago, while running for a Lexington-area seat in the U.S. House, McGrath had publicly opposed Kavanaugh’s confirmation, citing his judicial record specifically. Last Wednesday, she was quoted in the Louisville Courier-Journal stating that she “probably would have voted for him,” despite believing the sexual assault allegations against him. That evening, she flipped back, announcing on Twitter that “upon further reflection and further understanding of his record, I would have voted no.”

This was bad enough to prompt Louisville-area Congressman John Yarmuth, D, to wish openly for a contested primary. It may be too much for her to recover from.

Either way, McConnell proved in 2014 — first against Bevin in the primary and then against his Democratic opponent in the general — that he knows how to define his opponents early and crush them by surprisingly wide margins.

Once Bevin’s race is over — and especially if Bevin wins — expect to see it happen again in 2020.