During a campaign in which Republicans appealed again and again to California Rep. Nancy Pelosi’s potential return to the speaker’s chair, many Democratic candidates promised not to support her for speaker. And last week, 16 Democrats signed a letter stating that they will not support her.

But whatever actual revolt there might have been has begun to fizzle, and may not last much longer. Rep. Brian Higgins, D-N.Y., was the first to remove his name from that letter, and he surely won’t be the last.

Democrats never had any business pretending to distance themselves from Pelosi during the election season. She was the person making their majority possible. She did more than anyone else to raise the money and create the message that led to their 40-seat gain. If she succeeded, Pelosi deserved to be speaker. Who could take that away from her?

Another thing making her indestructible is the magnitude of California’s Democratic House delegation. Its 45 members actually outnumber the Congressional Black Caucus. Building party support from such a large base is a lot easier than piecing it together from scratch.

And then the other question is who can replace Pelosi. One CBC member, Rep. Marcia Fudge, D-Ohio, announced less than two weeks ago that she was considering a run for speaker. She would have been a good opponent — a black member and part of the group of some three dozen, who together with other Pelosi skeptics have the numbers to prevent her from being elected Speaker.

But then Fudge suddenly threw her backing behind Pelosi. She was specially motivated by her own scandal. An Ohio Democratic judge and official, for whom she had vouched at his domestic violence sentencing, had just been accused of murdering his wife. This would not do for her speaker bid, especially not in the age of #MeToo.

Although Pelosi had a scare, the notion that she will win election as speaker and resume the post she held from 2007 to early 2011 is becoming more credible and stronger by the day. But Republicans, eager to win back their majority in 2020, should keep a close eye on who votes for her, and who promised not to during the campaign.

Mississippi runoff: One last bit of 2018 business. So far, news coverage has indicated that Tuesday’s runoff in Mississippi isn’t going so well for appointed Sen. Cindy Hyde-Smith, R, against Democratic Clinton administration alumnus Mike Espy. A late poll indicates that the Republicans will probably still win, but this race is becoming a cautionary tale about what happens when a weak candidate is elevated beyond his or her ability.

The crowd-funded poll, conducted for the RRH Elections blog by JMC Analytics and  Bold Blue Campaigns, appears to be the only one publicly available. It shows Hyde-Smith leading by 10 points — and more importantly, well above 50 percent of the vote at 54. The vote divides sharply along racial lines, although Hyde-Smith leads with all age groups.

Republicans are still very nervous after what happened last year in Alabama, but it appears that she Hyde-Smith will win as expected, riding to a relatively narrow victory on the back of two late events by President Trump. If so, she will prevail by a rather poor margin for a Republican running in a conservative state like Mississippi.

Hyde-Smith’s weak campaign, thoughtless remarks, and poor debate performance all highlight how thoughtless it was of Gov. Phil Bryant, R, to appoint a senator who had been a Democrat until 2010, and whose primary claim to the position was her seniority in state government and not her promise as a figure that could lead the state GOP forward in the future.

That is not to say that the other Republican in the jungle primary, state Sen. Chris McDaniel, would have been a good candidate — quite the contrary. But Mississippi has young conservative politicians who lack his baggage and have much more substance and smarts and than Hyde-Smith. Leaning Republican Retention.

Here we go again — beginning Wednesday, we’re back into the presidential cycle.

There will be plenty of time to look at all of the Democrats who hope to challenge President Trump. But our first concern has to be Trump’s means of re-election.

Strategy: He always seems to face an uphill battle due to his low approval ratings, but Trump has shown that he can win with low ratings, and in fact his ratings today are better than they were in the exit polls on the day he won.

So how does Trump do it? Have a look at this user-generated map, courtesy of the excellent 270 To Win. 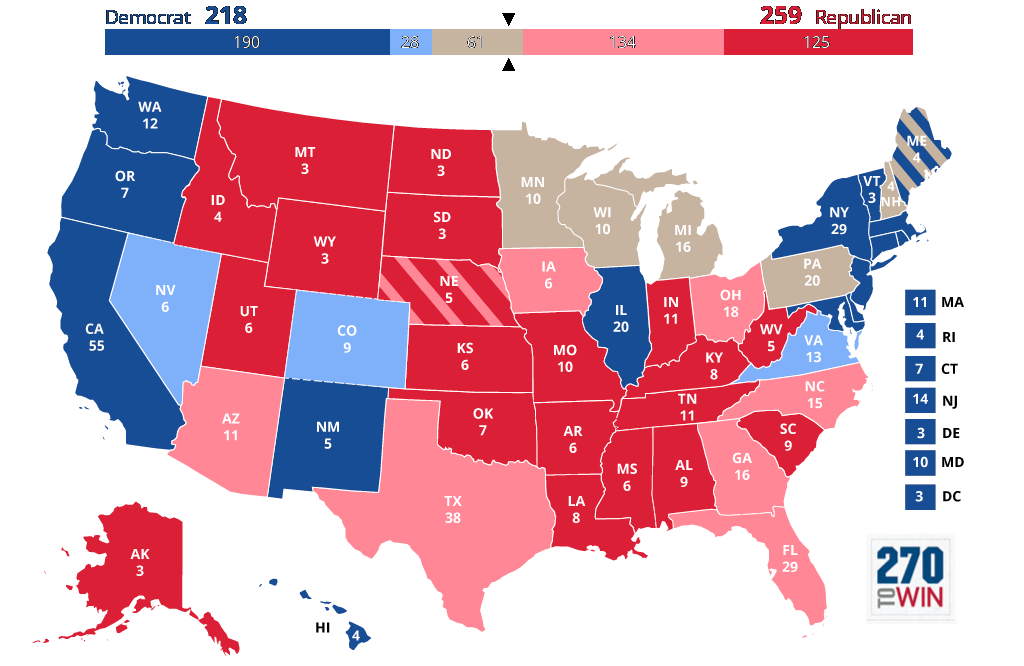 Note that this is not a predictive map, but a strategic blueprint. (Or “Redprint” — ha!)

In pink and red are the states (and districts) that Trump probably must hold on to from last time. (There might be alternative paths, but this is what makes the most sense.) Trump has a decent chance in all of these states, although the pink states are the ones where he may have more trouble, based on their swing-y nature or on recent trends.

Path to a tie: If Trump can in fact hold on to the red and pink states on the map (and Nebraska’s second congressional district), that puts him just ten electoral votes away from a tie that would throw the presidential race to the U.S. House that is seated in January 2020. In the unlikely event of a tie, each state delegation would get one vote. We don’t know what the House will look like at that point, but Republicans would win such a vote in the Democratic Congress about to be seated — they hold majorities in 26 state House delegations, Democrats hold majorities in 22, and two state delegations (Pennsylvania and Michigan) are tied and would therefore presumably abstain.

The key states: Given the low likelihood that the election will actually be thrown to the House, however, we should just say instead that a win in all of the pink and red states above would leave Trump just 11 electoral votes away from re-election, or just ten away if we wins again in Maine’s second congressional district and the single electoral vote that comes with it.

The good news for Trump, based on the 2018 election outcome, is that Republicans extended his success in the most critical states — especially the must-win states of Florida and Ohio — in spite of the cycle’s clear trend against Republicans.

Many people have pointed to the fact that Sen. Sherrod Brown, D, won re-election, and that he may even run for president as the kind of Democrat who can win Ohio. But he won’t get the nomination, and his re-election was expected over a weak opponent.

The more interesting outcome in Ohio was Republican Governor-elect Mike DeWine’s win. It was not even expected in the end, yet it was decisive, much like Trump’s victory in Ohio in 2016.

Governor-elect Ron DeSantis’ win in Florida was a lot closer, but of course that state is much more swingy, too. That win proves that even under the worst political conditions, the GOP turnout machine in Florida is as formidable as it ever was, capable of delivering a shock like the one it delivered in 2016. It probably just created wins in two key races (including that of Senator-elect Rick Scott) that Republicans should have lost by all rights.

In Iowa, despite the loss of two House seats, Republicans narrowly held the governorship and maintained majorities in both houses of the state legislature. They gained three seats in the state Senate, for what that’s worth. In a hostile midterm environment, that’s not bad — good enough for Trump to feel sure he will once again be competitive in Iowa. He may even begin the cycle with a clear advantage in the Hawkeye State, which has been following its neighbor Missouri in moving to the right. Republicans in 2020 will also be defending the seat of freshman Sen. Joni Ernst, R.

In North Carolina, there was no statewide race by which one could easily judge GOP performance (the governor’s race is in 2020, and neither senator was up). Republicans did hang on in all of the contested congressional races. Trump will remain as competitive there in 2020 as he was in 2016. Republicans will be defending the seat of freshman Sen. Thom Tillis, R. Republicans will be holding their convention in Charlotte in August 2020.

Arizona, where Trump under-performed previous Republican candidates in 2016, witnessed a Democratic win for Senate, but a GOP win for governor. This is a state that Trump’s campaign needs to watch carefully, because it’s probably a must-win state and victory there is by no means assured.

‘Blue Wall’ So what we’ve established so far is that it at least isn’t crazy to think that Trump can win the states that are pink or red on the map above. And again, that would leave him 10 or 11 electoral votes shy of a win.

So it doesn’t take any special genius to realize that this makes Minnesota and Wisconsin (ten EVs each) the two most important states on this entire map. Expect Trump to focus heavily on these two states. Note that there is also a more challenging path through New Hampshire and Nevada (both of which Trump came just shy of winning in 2016).

Republicans lost both Minnesota and Wisconsin in 2018 — narrowly in Wisconsin, and in a wipeout in Minnesota. But neither of these states has become unwinnable. Gov. Scott Walker missed a third term only narrowly.

In Minnesota, Republicans strangely collapsed at the local and statewide levels, even as they picked up two U.S. House seats formerly held by Democrats. It was an odd election in a state whose voters tend to flip their state legislature on a very regular basis.

President Trump came heartbreakingly close to winning Minnesota in 2016, and it stands to reason he’ll spend a lot of time there in 2020. In contrast to Arizona and Georgia, Minnesota is a state tailor-made for Trump, where his message resonates with working-class people better than that of other Republicans before him.

As for Michigan and Pennsylvania, Republican losses there in 2018 shouldn’t be taken as a sign that they’re hopeless, but they’re going to be more challenging.

The state GOP in Pennsylvania simply failed to field credible candidates for Senate or governor. In Michigan, governing Republicans simply ran out their mandate. With the Rick Snyder Era over, the voters went back to the other party’s candidate for governor, as they had in choosing Democrat Jennifer Granholm in 2002 after Republican John Engler’s tenure and Snyder after Granholm’s tenure.

Trump has to view these two states as greater challenges, but he will play for both if he’s wise. After all, the aim is to keep as many of these “Blue Wall” states on the table for as long as possible.