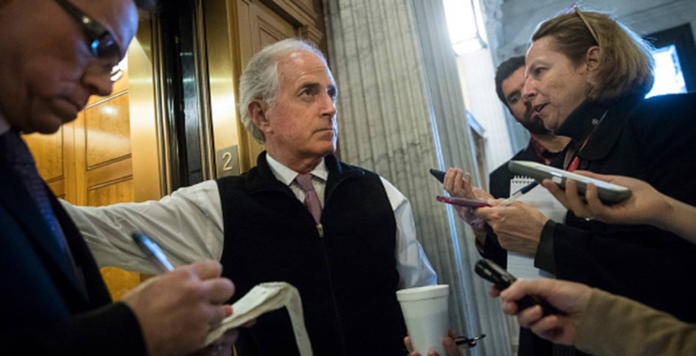 Retiring Sen. Bob Corker (R-TN) has been a longtime critic of the president. He’s also praising the Democrat running for his Senate seat and largely ignoring the woman running from his own party.

“Republicans are increasingly unnerved by the rift between retiring Sen. Bob Corker and Marsha Blackburn, the GOP congresswoman vying to replace him, saying it could cost them a must-win seat in Tennessee,” per Politico today.

“The duo’s chilly relationship has spilled into the open after Corker praised Blackburn’s Democratic opponent and refused to even utter her name in multiple media appearances this spring. The retiring senator’s remarks have boosted former Democratic Gov. Phil Bredesen and agitated Blackburn’s supporters, who want Corker to help heal the state party, not inflame its divisions.”

Corker has nevertheless said he will vote for Blackburn, despite not being a vocal supporter of her in the race. He also said, however, “I don’t plan to campaign against Bredesen.”

Recent polls have shown the Democrat with an edge on Blackburn, although November is still a ways off.

Republicans are generally expected to hold on to a slim majority in the Senate in 2018, perhaps unseating a few Democrats trying to get re-elected in red states that went for Trump. But a lost Senate seat in Tennessee is still a big deal.