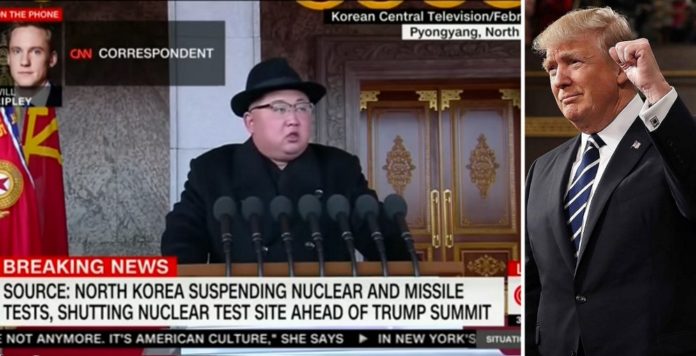 North Korea has agreed to suspend all Nuclear Tests and close up a major test site. This is very good news for North Korea and the World – big progress! Look forward to our Summit.

CNN’s Will Ripley spoke relayed a quote directly from a North Korean source:

Kim Jong Un declared the DPRK had finished its nuclear program in an announcement to the North Korea people and does nor need to conduct further tests.

There are still many questions to be answered about what President Trump can accomplish in his summit with the North Korean leader. Kim Jong Un is an untrustworthy partner and the history of negotiations with communist regimes is fraught with challenge.

Talks could fall apart if Kim demands the United State give up too much in the negotiation or doesn’t show to be serious partner. “There may not be any there there at all,” Michael Green, a former official at the White House and Pentagon, told the Wall Street Journal.

President Donald Trump will cement his place in American and world history if North Korea is successfully reintegrated into the national community. An even bigger win will be if North Korea agrees to dismantle it’s nuclear weapons altogether.