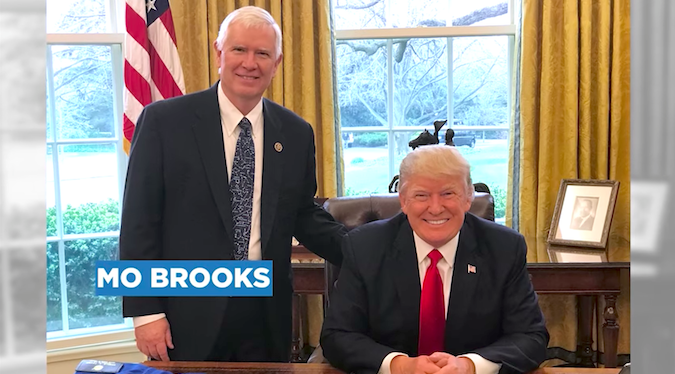 “Only way to put two conservatives in runoff”

As part of his “Drain the Swamp Bus Tour,” Rep. Mo Brooks (AL-05) made a stop Friday in Mobile, Ala. With the top three candidates locked in a fierce battle for the runoff, Brooks urged voters in the upcoming Senate primary to vote for him, instead of one of the six lower tier candidates.

Speaking in downtown Mobile, Brooks addressed the upcoming primary, “There are great candidates in this race, but only two can make the runoff. Judge Moore is leading every single public poll–he’s in the runoff no matter what. But the fight for the second spot is a race between myself and Luther Strange. I’m asking conservatives supporting other candidates to join me–to stop Luther Strange and put TWO conservatives in the runoff.”

Brooks is in a heated competition with Sen. Luther Strange, who was appointed to Attorney General Jeff Sessions’ Senate seat by former Gov. Robert Bentley. Questions arose regarding Strange’s appointment due to his refusal to indict Bentley on corruption charges; Strange was Alabama’s Attorney General at the time.

Strange has aligned himself with Senate Majority Leader Mitch McConnell, who has launched blistering attacks on Brooks and Moore. Brooks called for McConnell to step aside in the wake of Republicans’ failure to repeal ObamaCare.

Brooks continued, “There are two tiers in this race. Three candidates are getting most of the vote, and then there are some good folks in this race who just haven’t caught fire yet. It looks hard for them to win at this point.  But a vote for Strange is a vote for McConnell. And so if you want to stop McConnell and Luther, I’m asking you not to throw your vote away, but to come join our campaign.”

Brooks’ Mobile stop is in the backyard of one of Trip Pittman, who according to latest public polls was garnering seven percent of the vote.

Brooks is part of a field of nine candidates running in the Aug. 15 primary election.