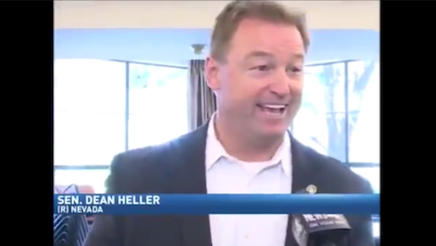 Just when everybody thought Senator Dean Heller couldn’t hurt himself anymore on his Obamacare position, he managed to in an interview with News 4 this week.

“And obviously it got in the middle of this – this health care battle, and I feel real pleased with the way this thing turned out,” Heller said.

This comes just weeks after Heller voted in favor of the “skinny repeal” proposal at the end of July.

It marks yet another flip-flop the Senator has made on Obamacare, and honestly, it’s getting difficult to keep track.

He campaigned on repeal and replace of Obamacare, and that’s the way he voted in 2015. But now, it seems he’s had no problem turning his back on the conservative voters that elected him.

He’s more concerned about the impact it could have on Medicaid and what it might mean for his reelection chances.

Those reelection chances are starting to look quite bleak.

We reported last week, a new poll shows the head to head battle between Tarkanian and Heller is statistically tied.

Tarkanian, who’s been a longstanding supporter of President Trump on social media and in the press, is holding back no punches.

“Over the past several weeks, I have been inundated with text, emails, and phone calls from people of all walks of life across the state of Nevada who are upset with Dean Heller for campaigning one way in Nevada and voting the exact opposite in Washington DC. The refrain is the same: he turned his back on us.”

“Nevada deserves a Senator who will keep his word and vote in Washington DC the same way he campaigns here in Nevada.”

“I am a conservative Republican who supports the policies of President Trump to repeal Obamacare and end illegal immigration.”