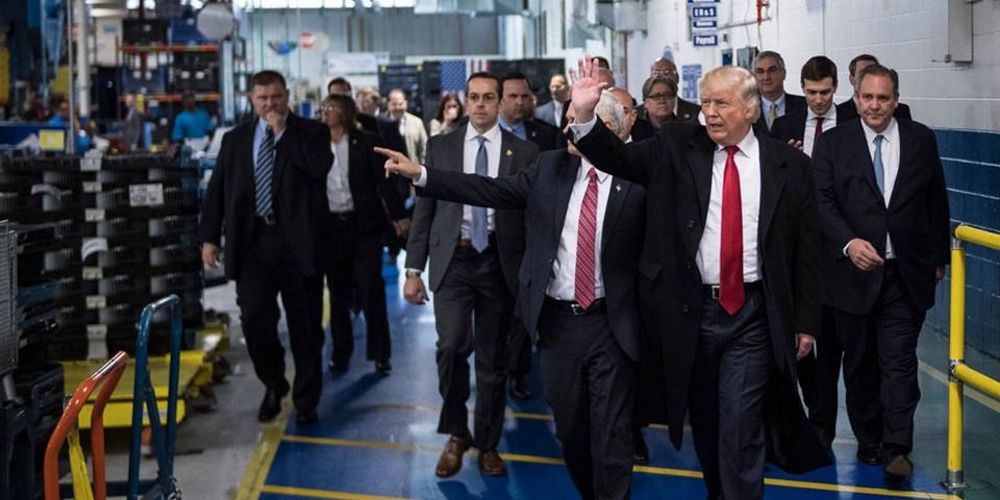 No one can deny it, and there’s really no other way to put it. Donald Trump’s Carrier coup was a massive and unqualified victory.

Liberals and conservatives alike might shake their heads. But for Trump’s long-hidden supporters hidden working-class supporters who came out on election day, it’s a sign that he can do what no one thinks he can, and also that he keeps his promises.

Trump’s appearance at Carrier in Indianapolis last week was just a win, even if it violates liberals’ sensibilities and conservatives’ principles at the same time. It came after the company had made the announcement that it would be keeping at least 1,100 jobs in Indiana that had been slated to go to Mexico. And it was all because of a deal with Trump — or perhaps more properly, with the Indiana governor who will soon be his vice president.

The optics were terrific for Trump. Here he was, keeping a highly implausible promise that had been met by universal eye-rolls from a political press that was just as certain this couldn’t happen as it had been that he’d lose the election.

And yes, the same liberals who cut all those ads in past election cycles about jobs going overseas were now complaining that this was just one company. Some of them even rediscovered what they had missed throughout the Obama era — that government interference in “saving or creating jobs” has big trade-offs and doesn’t ultimately work. (Hey, welcome to the club.)

Conservatives were disturbed because this was a total violation of sound economic principles. Trump was following Obama’s lead in bullying businesses into suboptimal decisions. Also, the deal involved a one-time corporate inducement, not the serious systemic tax and regulatory reform that will be required to make American companies want to stay. If any company can get a $7 million tax break just for not going to Mexico, which company won’t do that?

But step back for a moment and instead look at this from the perspective of workers in Ohio, Iowa, Pennsylvania, Wisconsin and Michigan who just unexpectedly pushed Trump over the top. From their perspective, he’s keeping the very promise that led them to vote for him. He was the first politician in a long time even to acknowledge the difficulties they faced — now he’s actually made good on something, and he isn’t even in office yet. This looks like one more proof of his consistent ability to confound the common wisdom and get results.

Of course, the liberals are right that it’s just one company. And the conservatives are right that offering inducements to companies is not a sustainable way to keep jobs in America. But to put the most optimistic face on it, what if this PR win is just for tiding people over until there’s a chance for more substantive reform?

Might he succeed? Think about it this way: The Obama era has seen sluggish job growth and sluggish GDP growth. Even today, in late 2016, employment among prime-age workers (age 25-54) is still below where it was before the financial crisis, both in terms of its rate and in absolute numbers. GDP for 2016 is on pace to grow at less than 2 percent, and in fact Obama’s presidency has seen only three quarters with annualized growth of 3 percent or higher. For context, there were eleven such quarters in a row during George W. Bush’s presidency, and 18 in a row during Bill Clinton’s presidency that were above 4 percent growth.

Trump will, upon taking office, have opportunities to do things that are more systemic than just making deals with individual companies. He can sign pipeline permits, open federal lands for oil leases, and, with help from Congress, instantly repeal a bevy of late Obama-era regulations.

Trump has been on Twitter talking about a 35 percent tariff, and that is very unlikely to happen. But there is a non-zero chance that he could get a corporate tax reform bill to his desk that stops punishing companies that bring back overseas profits to invest them at home. He has also promised a one-time amnesty for companies that want to repatriate overseas profits right away. Who knows? That could be a game-changer in year one. Americans aren’t used to really strong job growth, but that doesn’t mean it can’t happen.

In the end, you have to measure Trump’s potential not so much by your opinion of his ideas, but by your opinion of Obama’s performance. If Obama’s vision for America’s economy is the best it can do in this modern era, then Trump will ultimately be frustrated in office. He will disappoint his supporters as jobs continue to leave the U.S. and he run out of carrots and sticks to make them stay. Republicans will be severely punished in the 2018 Midterms.

But on the other hand, what if Obama’s vision for the economy is simply defective, unimaginative, unambitious? What if, with his aggressive, left-wing labor and environmental policies, he has been driving the car for the last six years with the emergency brake on? In that case, Trump’s success could be almost effortless. Disengage that brake, and the car starts rolling downhill, as nature dictates.

Were that scenario to prove true, it would be yet another confounding surprise for the conventional wisdom. Just the sort of thing 2016 has taught us all to expect.

House Democrats chose to keep Nancy Pelosi as their leader, just as we expected. But it doesn’t mean they’re terribly happy about it. And there are no visible signs that the party is engaged in the sort of introspection that would normally accompany a loss as bitter and unexpected as it just suffered. As Pelosi put in on Sunday, she doesn’t think her members are looking for “a new direction.” And perhaps that’s part of their larger problem.

Tim Ryan’s candidacy had been doomed from the beginning, as we pointed out last week. His promises to give more voice to Democrats in the Heartland rang empty in a caucus that no longer has much of a presence there. And his counsel for Democrats, to drop the aggressive Culture War politics and instead champion low-income rural workers, couldn’t resonate in a party that no longer represents many such workers.

Ryan’s 63 votes was the best showing of anyone running for leadership against Pelosi since she first became the House Democratic leader in 2002.

Pelosi has promised modest reforms that will make her caucus slightly more democratic. Member will now be able to elect the chairman of the House party’s campaign arm (the DCCC) instead of merely ratifying the leader’s appointment. A handful of minor leadership posts have been created for junior members of the caucus. But many House Democrats are still restive and worried that they’re on the path to nowhere, and they’re not afraid to say so in public, even after her victory.

House Democrats have completely lost their party’s centrist wing over the course of four elections. By 2009, after Obama’s election, they had really built up that wing of the party. It formed the spine of their majority through the American heartland. At that time, you could walk from Charleston, S.C. to Detroit; from North Dakota to Louisville, Ky.; from Southern Ohio to Bangor, Maine; from the Texas Gulf Coast to the Pacific Ocean; without passing through a single district represented by a Republican.

But all it took was two years of full Democratic control to make it all fall apart. In 2010, they sacrificed dozens of their moderates for something that might prove quite fleeting — the passage of Obamacare.

That election paved the way for Republicans to consolidate their gains through the redistricting process. In 2012, they held onto their House majority and picked up a few more rural seats in North Carolina and Kentucky, even as Mitt Romney went down to a stinging defeat.

In 2014, Republicans took over the House seats of Democratic moderates in West Virginia, Georgia, Utah, North Carolina, Northern New York State, and downstate Illinois. Some of those seats connected the party to its older, labor-dominated and more moderate past.

Democrats had counted on Donald Trump being their trump card in 2016. They believed that a candidate so out of touch with their “coalition of the ascendant” would harm Republicans all over the map.

In the end, they were completely wrong. Trump might have been a net negative in three suburban seats they lost (in New Jersey, Illinois and Nevada). But on the other side of that coin, his appeal in places like Northern Maine and northeast Iowa made it completely impossible for Democrats to take back any of the rural territory they lost during the previous three cycles.

It would be a mistake to blame Pelosi for her party’s 2016 failure. But in re-electing her without much introspection, House Democrats have perhaps become content with the same old leaders and the same old losing culture that’s already cost them so badly. Maybe they’re waiting for Trump to implode and hand them back the House. But they’ll have to win back a lot of Trump voters to do it.