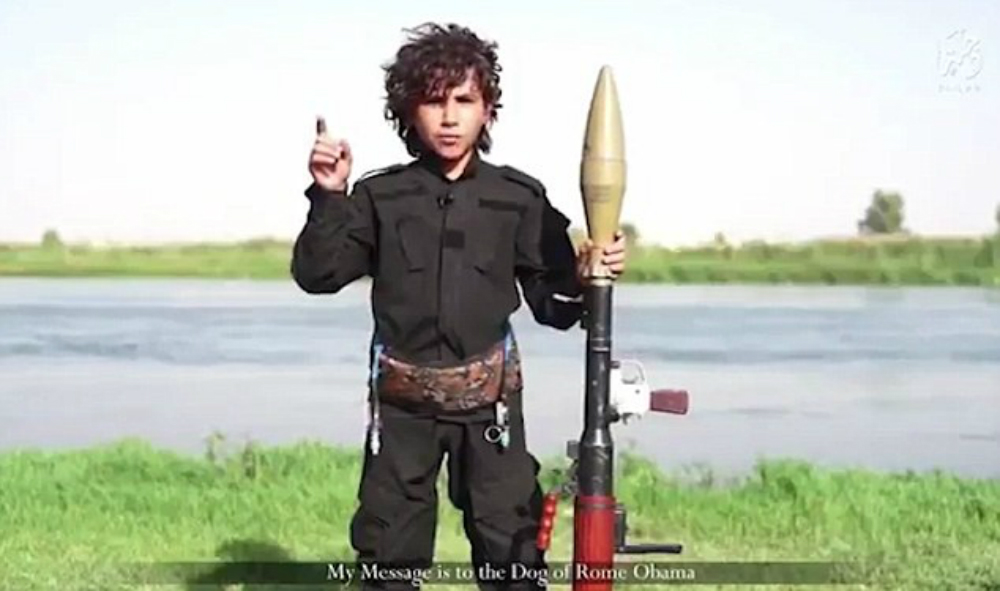 A child soldier from the Islamic extremist terror group known as ISIS is threatening President Obama in a new video that serves as a chilling reminder of the terror group’s use of kids in its evil operations.

“A child jihadi armed with a rocket-propelled grenade has threatened to behead ‘Dog of Rome Obama’ in a chilling new video released by ISIS.

The boy, who is only about ten-years-old, tells US President Barack Obama he is ‘dreaming’ if he thinks American soldiers will enter the large swathes of land the terror group controls.

With one finger pointed to the sky – a hand signal which has become synonymous with ISIS – he warns: ‘Wake up from your sleep and pay the jiz’ yah (religious tax) in submission before the swords of the khalifah (caliphate) reach you and cut your filthy head.’

The child, dressed in army fatigues, calls Obama the ‘Dog of Rome’, which means servant of the Vatican, and references the US’ military intervention in Syria and Iraq.

‘If you think your soldiers will enter the land of the khilafah and pollute it with their filth, then you’re dreaming,’ the boy, one of the so-called ‘cubs of the caliphate’, says.

The video ends with an image of a motorboat travelling through an expanse of water – possibly referencing a journey across the Atlantic or the threat of terrorists slipping into Europe hidden among the hundreds of thousands of migrants.”