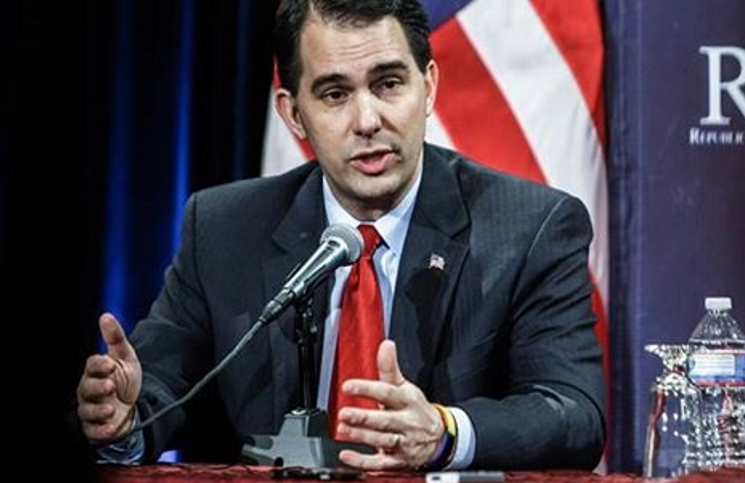 Scott Walker: Liz Mair, a social media consultant for Scottt Walker’s campaign, made some tweets before she was hired disparaging Iowa’s role as the first state to conduct the presidential caucuses. She also mentioned the fact that Iowa is a state heavily dependent on agricultural subsidies.This is really all just common sense, but the ensuing kerfuffle led to Iowa Republicans attacking Mair and one conservative writer even questioning her dual British citizenship. She was ultimately forced to resign.

This wouldn’t have been noticed at all except that Mair is a friend or acquaintance to many conservative journalists and pundits (including yours truly) and thus her case garnered her a lot of sympathy. But let’s be frank about this: From a candidate’s perspective, consultants are 100 percent expendable. They are hired to help win elections, and the moment they start doing the opposite — even if it is for reasons beyond their control — they understand as well as anyone else that they are about to see the underside of a large multi-passenger vehicle.

Even so, Mair’s offense was mild — at best a borderline case. This episode’s outcome, though not broadly meaningful on its own, adds a few brushstrokes to an unflattering portrait of Team Walker’s strategy and goals. They appear just a bit too eager to please everyone, and it’s hard to understand why because this isn’t what his political career has been about so far.

In this case, they have rewarded the loudest whiners among a few easily offended Iowa Republicans, and also perhaps a few others who found Mair’s personal social liberalism objectionable (although social conservatives were also some of her staunchest defenders).

None of this would be remarkable, except that by the time it happened it was already part of a pattern. Walker, whose team had to have seen Mair’s Twitter feed before she was hired, had already softened his position on ethanol at a forum in Iowa and hardened his stance on immigration — in each case attempting to pander to one constituency or another. This is really not a road Walker wants to or needs to go down. In fact, it could prove his undoing if he stays on it.

After governing his state in a way that demonstrates political confidence, Walker has shown signs lately that he completely lacks it in his presidential campaign. He appears to feel like he has to prove something when all the proof is there already.

This is supposed to be the beauty of Walker’s candidacy: He doesn’t have to call himself a “severe conservative” or talk about “self-deporting” (or even just deporting) immigrants in order to win conservative support. He’s not like Mitt Romney, a former liberal Republican governor of Massachusetts who needs to convince people he’s something he isn’t in order to win a primary. He isn’t even like Jeb Bush, a governor who had a decent conservative record in office but currently suffers from some conservatives’ distrust.

Walker’s situation is much better. He has no baggage that Republican primary voters care about, and he has proven he’s trustworthy as a conservative. This should give him an advantage in that it means he doesn’t have to pander. What people admire most in him, as one local party boss in South Carolina put it recently, is that he has “guts.” Why ruin that image now with desperate-looking pandering and gimmicks?

Walker has the easiest case to make of any of the current challengers — including the newly entered Ted Cruz. He solved his state’s short-term and long-term fiscal problems with a full frontal assault on public-sector unions, the Left’s most important institution in Wisconsin. He held his ground in very difficult times — against massive protests, rioting in his state capitol building, and death threats. Because the reforms actually worked and the proof was irrefutable, he persuaded voters that he had been right all along and survived a recall attempt. Beyond his better-known Act 10 budget bill, he and the state legislature have caught Wisconsin up with the rest of the nation on other pet conservative causes, such as concealed carry, Right to Work, and probably soon restrictions on late-term abortion.

What this means is that even if Walker isn’t the best candidate, at least no one on the Right needs to think twice about whether this guy is “one of us.” And one cannot say that of most candidates for president. At the very least, it puts Walker past the threshold of acceptability for nearly every kind of conservative voter, and the initial first choice of enough GOP primary voters to make him competitive for the nomination.

It might seem somewhat counterintuitive, but beyond the conservative core, this should make Walker more palatable to the establishment as well. Candidates look weak and stupid when they pander during primaries. They stake out unsustainable positions and they make dubious flip-flops that leave voters skeptical later on. A candidate who can win conservatives without pandering is, therefore, the best of all worlds.

And so when he panders — whether to conservatives, Iowans, Liz Mair haters or corn farmers — Walker gives the impression that he lacks confidence in his ability to win by simply being himself.

This is a recipe for losing the voters’ respect. It’s one way he could really blow it in a race where he is arguably already the favorite — a previously unknown candidate with a high level of early support and plenty of room to grow, given his low name-recognition.

In 2012, Democrats made modest gains in the U.S. House thanks to Barack Obama’s coattails. It stands to reason, then, that they will regain some of what they lost in 2014 in the coming presidential year. But how much?

Here is a very early look at some of the Republican-held seats that are in greatest danger of flipping next year — all places where Democrats will surely work hard to find strong recruits.

Arizona-2:Martha McSally, R, won this fair-fight East Tucson seat (formerly held by Reps. Jim Kolbe, R, and Gabby Giffords, D) by less than 200 votes last year in her rematch with former Rep. Ron Barber, D. The race was nearly as close when she lost in 2012. This seat just isn’t going to be easy for anyone to hold this decade, period.

Maine-2: Republicans just won this seat for the first time since the 1990s, and it might seem difficult for Rep. Bruce Poliquin, R, to defend. But his victory in November was by a wide margin (even though he did not reach 50 percent) and came amid extremely high midterm turnout, thanks to (of all things) a bear-baiting referendum.

This suggests that the 2016 bump for Democrats will not be nearly as great here as it might be elsewhere, as does the overwhelming whiteness of the district. Provided he can establish an appropriate rapport with his constituents, Poliquin has to be the favorite on paper, especially if Democratic primary voters allow a rematch against Emily Cain, a social-liberal state legislator.

Illinois-10: In Chicago’s northern suburbs, there’s yet another district that teeters every year. It always came close to going Blue (but never did) every two years when Sen. Mark Kirk, R, held it, but Democrats made it more favorable to themselves in redistricting. This time the seat is back in the GOP column.Rep. Robert Dold, R, could well face the man he lost to in 2012 then defeated in 2014, Brad Schneider, D. It will be a close contest no matter what, but the Obama-home-state effect will not be a factor this time as it was in 2012.

Iowa-1: Heres another newly Republican seat that could flip back. Jim Nussle, R, once held this seat before Rep. Bruce Braley did. The map hasn’t changed enough that there’s any reason to think a Republican cannot hold it. But it will never be easy. Rep. Rod Blum, R, has his work cut out for him in holding it down.

Nevada-4: Democrats could conceivably win a lot of House seats next yera, but this is probably the only one that they will find to be a slam-dunk takeback. Extremely low Democratic turnout allowed Rep. Cresent Hardy, R, to sneak in and seize a very Democratic district, but that is unlikely to happen again in a presidential year. That goes double if Sen. Harry Reid, D, actually does run for re-election and pulls out all the stops to save himself as he did in 2010.

New Hampshire-1: This district has changed hands four times in ten years. Rep. Frank Guinta, R, is now serving his second non-consecutive term. It is still possible that he could face his fourth matchup against former Rep. Carol Shea-Porter, whom he defeated in 2010 and 2014 but lost to in 2012.

New York-24: This Syracuse-area seat is not an easy one for a Republican to hold under any circumstances. John Katko’s resounding 20-point victory over former Rep. Dan Maffei, D, last November holds forth at least some hope, but the fundamentals of the district will be working against him. One open Question is whether Hillary Clinton has any strong residual popularity in upstate New York that can help others downticket.

Texas-23: Rep. Will Hurd, R, won this district last year, which has previously been the subject of a Supreme Court case regarding its ethnic composition. It has a bloody history, changing shapes three times since 2000 and changing hands in 2006, 2010, 2012 and 2014. Hurd, a former CIA officer who worked undercover in Pakistan, unexpectedly knocked off a rising star in Texas Democratic politics last year — Pete Gallego — who already started making noises last month about a possible rematch.